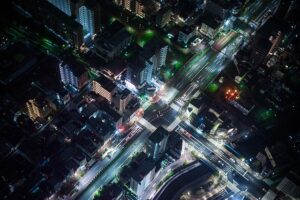 Fascinating columns on future freeway need and freeway capacity. Though why are there long queues of vehicles on freeways late in the rush hour? If every vehicle gets on at an entrance and leaves at an exit, why don’t the queues disappear quickly?

Fascinating columns on future freeway need and freeway capacity. Though why are there long queues of vehicles on freeways late in the rush hour? If every vehicle gets on at an entrance and leaves at an exit, why don’t the queues disappear quickly? Well, it is rather counter-intuitive. You’re exactly right, every vehicle that enters a freeway exits it, hopefully with their own power. Since the number of exit ramps is about equal to the number of entrance ramps, the freeways should empty quickly. They do not.

Part of the issue is that in the morning, the entrance ramps are throughout the edges of the metropolitan area, while the exit ramps are concentrated in the central city. Though that cannot be the entire reason, as people come from one direction – be it north, south, east, or west – and then leave in that same direction. For example, if a car starts by going southbound on the SR-51, they leave SR-51 going southbound – even if they go onto I-10, either eastbound or westbound.

Not very convincing yet, is it? Every car on the freeway is moving, until some other car makes them slow or stop. Is it as simple as the first car – wherever that is – is stopped?

It should be the opposite of that Dairy Queen in Brainerd, Minnesota last week where the first customer paid for the customer behind them, and the next driver paid for the car behind them, and so on for 900 cars; except in reverse. If the first car is moving, then the second car is moving, then the third, and so on for 900 cars! If no one stops, then nobody stops! That is the purpose of the freeway, right? No stop lights.

We still have that problem with physics where no two objects can be in the exact same place at exactly the same time. So even if the car in front of you is moving, you cannot be where that car is until after it moves further forward. So, it does seem that if all cars are moving, they can all continue to move. True, though it takes time for the car in front of you to move.

Galileo tried to measure the speed of light by having two people stand on separate hills about a mile apart during dusk. The person on one hill uncovered a lit lantern, and when the person on the other hill saw the first lantern, they uncovered their lit lantern. Unfortunately, light is too fast to measure that way. So, at the time, Aristotle seemed right.

Back to cars driving.

Let’s include another column. The extra column sums the excess volume in each 15-minute interval.

Beginning at 8:15 AM, the arriving vehicles are less than the capacity. Not helpful enough.

It takes until 10:00 AM for all the previously arriving cars to travel through the freeway.

Fortunately, nowhere in the Phoenix Valley of the Sun does this excess queuing happen for three hours. … It does in Los Angeles. … Eventually here too.

Curious about something traffic? Call or e-mail Paul at (480) 505-3931 and pbasha@summitlandmgmt.com 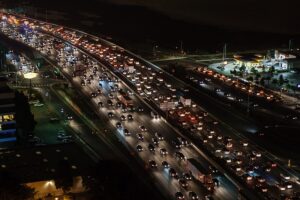 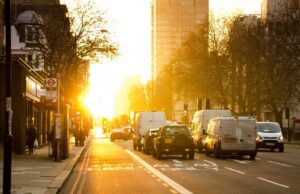